No Killer Has Wings: The Casebook of Dr. Joel Hoffman (2017) by Arthur Porges (edited by Richard Simms) 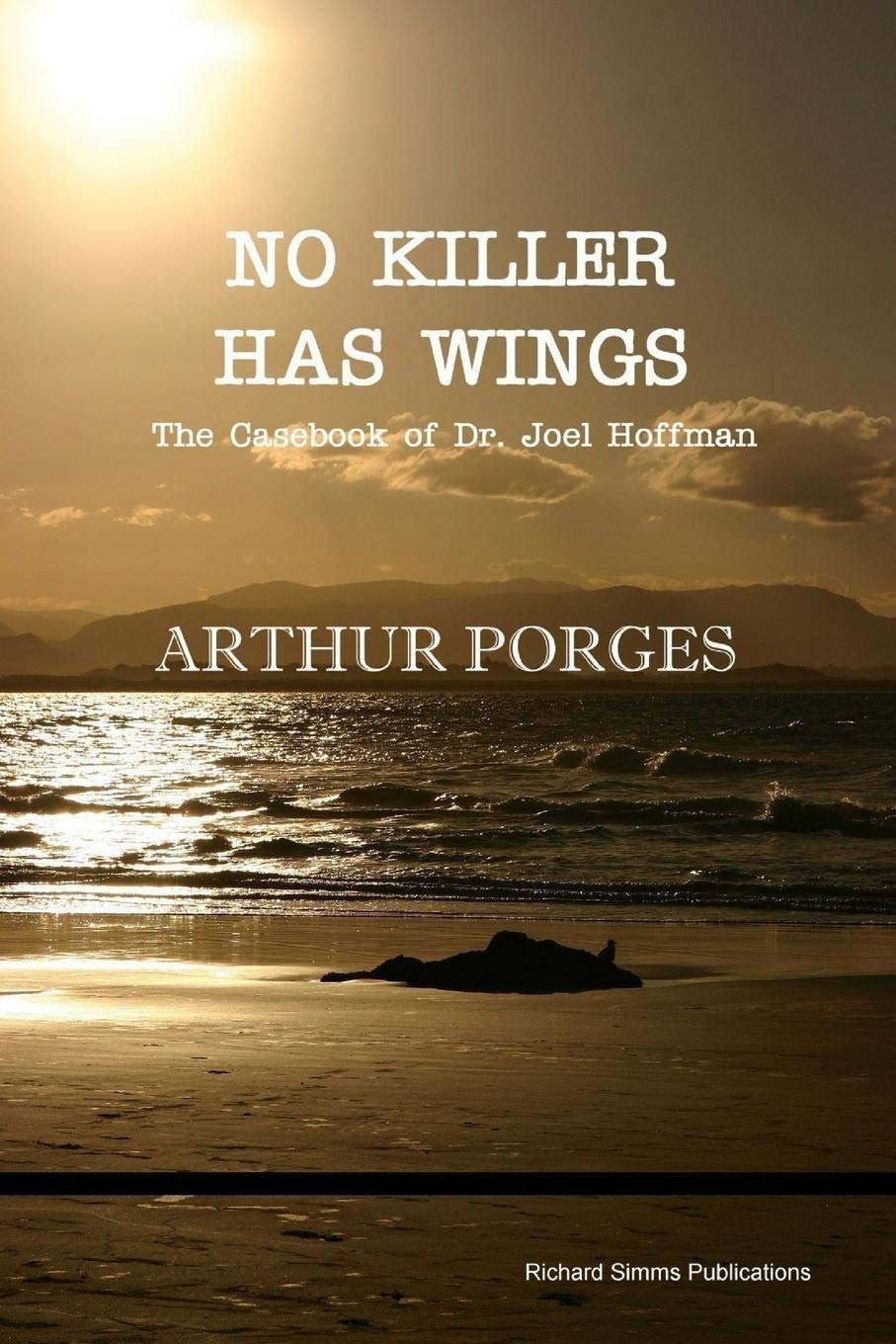 Another blast from the past here. Back in The Mammoth Book of Perfect Crimes and Impossible Mysteries, I read a story by Arthur Porges, “No Killer Has Wings,” starring Dr. Joel Hoffman. I really liked it, but assumed that I would never get to read the rest of his stories, or at least that it would be a while before I could. But I hoped, and lo and behold Richard Simms Publications came out with a collection of the Dr. Hoffman stories, as well as many other collections of Porges’ work.

No Killer Has Wings contains all six of the Dr. Hoffman stories, and I admit I wish that there had been a little more here. I’m not at all blaming Richard Simms for not bringing Porges back from the dead to write more stories, but the length makes it harder for me to recommend this collection to my friends because of how short it is. I had the same issue with Edward D. Hoch’s The Spy Who Read Latin. But I’ll get back to Hoch later in this review.

Dr. Hoffman is a pathologist who’s often called in by Lieutenant Ader to fill in for the political hack of a local coroner (which Porges reminds you of once a story). The series kicks off with a gut-punch for Hoffman in “Dead Drunk.” He and Ader arrive at the scene of a brutal car accident that has left a child dead in the street. The reckless driver is a rich playboy, one Gordon Vance Whitman III, who’s quick to fall on the “diabetic coma!” excuse for his recklessness and whose father was smart enough to tie his son’s money up in such away that even suing him for damages is near-impossible. Needless to say, Hoffman isn’t shedding tears when the playboy turns up dead in his locked apartment, but Ader’s gut instinct makes him send the body to Hoffman for an autopsy. And what he discovers turns this into an impossible crime.

Whitman got a dose of phosgene gas in his modern, urban apartment. Phosgene gas is a gas used in World War I that gives the victim a coughing fit before turning into hydrochloric acid in their lungs. Not a pleasant way to die, and also a baffling one: the gas was only found in Whitman’s lungs and not in his apartment, meaning that the gas had to have been introduced directly into his lungs...which is impossible since the apartment was locked. The killer is obvious, but how was it done?

That “How was it done?” question fuels this collection, and is something that needs to be kept in mind if one wants to really enjoy these stories. I was under the impression that Porges was similar to one of my favorite mystery authors, Edward D. Hoch, but I think that there’s a difference: Hoch usually focus on a chain of logic in his mysteries, A--->B--->C, which in turn leads to D. etc. Or at least A+B+C=D. As JJ notes, Porges tends to focus more on a single problem, usually the “how,” and the other aspects of the mystery are secondary. That’s not to say that his stories aren’t as good as Hoch’s, but that they have a different focus. Once I got out of that mindset, I enjoyed these stories. “Dead Drunk”’s solution might not be solvable to the average person, but I enjoyed seeing it solved, and I felt like I learned something from it (contrast this with The Invisible Bullet, which I enjoyed but didn’t really feel more educated about science after finishing it.) And the ending brought a smile.

“Horse Collar Homicide” is more of the same. Another rich jerk dead, this one an old hidebound keeping his family under his thumb at all times and obsessing over the old days of gentlemen (who don’t work and are forbidden from doing so) and games, the latter of which proved fatal. The old man was sticking his head through a horse collar and making faces (it doesn’t make much more sense in context) when he suddenly had a seizure and died, right as the lights flickered. The death was not caused by electrocution, since the collar couldn't run a current anyway, and none of the victim’s relatives were anywhere near him at the time. So how was it done? This time, there’s a little more focus on the “who?” question, but it should be obvious long before the summation. The solution is more technical than “Dead Drunk,” and I found it harder to follow.

“Circle in the Dust” is an unusual story, and isn’t a locked room problem. An old woman is beaten to death in her home, and while it looks like a sordid everyday crime, a single circle in the dust indicates that the killer was after one of the woman’s many knick-knacks. But which one? Her nephew claims not to remember what was there, and the only clue is the circle. Once again, science is involved in figuring out what the object was, and once you know that the killer is obvious. While I will tentatively agree with JJ when he questions the science (I think I know what Porges was going for and it made sense while I was reading it) I will say that I really liked this. I enjoy these unusual problems that you can really only find in short stories.

“No Killer Has Wings” is the gem of this collection. A colonel is found battered to death on his private beach. The beach is surrounded by rocks, the tide is too rough for a killer to approach that way, and the only footprints on the beach are that of the dog...and the colonel’s hot-tempered nephew, who would lose his inheritance if he married. Said nephew’s walking stick was also the murder weapon, and things don’t look too good for him. Luckily, his fiancee is Ader’s niece, and she manages to pressure him into letting Hoffman investigate. This time, the solution doesn’t hinge upon science, but is simple and plausible. I want to say that it almost feels too simple, but I think there’s an elegance to it, and I can see someone who fails to solve it kicking themselves and grinning. A “fun” story, if that makes sense.

“A Puzzle in Sand” is a sequel of sorts. The family from the previous story has moved out and rented out their home, only for another impossible crime to take place on the same beach. This time, a well-regarded man is found shot to death on the beach. It turns out that he was far from a model citizen in the past and was being blackmailed by a rogue named Garrison. Garrison is now the main suspect in the murder, as his were the only other footprints on the beach. However, the case is so black that Ader is succumbing to fears that something else is going on (Porges is kind enough to point out how he was nowhere near this reluctant when it came to his niece’s fiance) and consults Hoffman.

Hoffman finds out that something is indeed going on, but it lacks the simple ingenuity of “No Killer Has Wings.” I still enjoyed it, and I might have been influenced because I caught the solution early on. Where the story stands out is in the ending. It’s surprisingly dark, and while one can say that justice is being done, I felt unsettled by it, so good work there. I think that Hoffman exaggerates how helpless he is though.

“Birds of a Feather” is the final story here, and a good one. This time the victim is a loan shark who apparently died of cyanide poisoning while changing a tire. Ordinarily it would be assumed that he was poisoned by food or aspirin, but there’s no trace of anything in his stomach...and there’s also the small matter of the poisoned canary at the victim’s side. This felt a little underwhelming compared to the previous two stories, but it was still a solid story. I do think that it is a little easy to tumble to what happened if just by process of elimination of the possibilities.

All in all, a really great one here. Excellent stories, and while they weren’t all winners, they were all satisfying to read, with some amusing narration. I have two more collections of his stories and you will see both of them on here soon, ideally, we’ll see. My track record on this is poor.