It’s a jungle out there, you know? 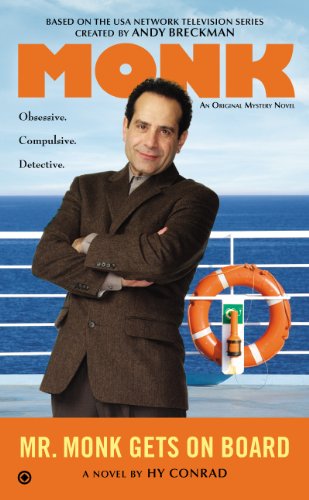 Monk was a TV series on the USA Network that stared Adrian Monk, a consultant for the San Francisco Police Department, who used to be part of them until his wife got blown up, which most people agree can derail your career something fierce. The show, which ran for eight seasons, featured Monk's quest to find his wife's killer, as well as get involved in many murders. More the latter than the former, to be honest. One of the more common plot devices on the show was to have someone who could not have committed the murder commit the murder, in a modern version of Christie Logic.* Monk's other main gimmick was that Monk suffered from Hollywood OCD**, which both made him insufferable (as someone with mild OCD tendencies himself, I can confirm this is true) as well as gave him an awareness of everything around him, useful for solving crimes (this is not true).

The spin-off novels by Lee Goldberg are, on the whole, are quite good. The ones written after the series ended felt weaker in the mystery plotting, but were still good on the whole. Theeeen Hy Conrad took over. The first book under his name, Mr. Monk Helps Himself was a horrid book that managed to not only bungle an interesting mystery plot, but also managed, in my opinion, to butcher the character of both Monk and his assistant/narrator of the books, Natalie. It’s hard to explain how, especially since I read the book about a year or so ago, but Monk came off as far more of a malicious jerk, and Natalie seemed far too...weak, I guess is the word, falling to pieces over the victim of the week. I dunno, again, it’s been awhile since I’ve read it, and I was a Goldberg fan.

But that was then, and this is now, and I decided to suck it up and pick up the next in the series, Mr. Monk Gets on Board. In his introduction, Conrad refers to this as a “lost episode” of the TV show, one he and the rest of the writers always wanted to do, but never had a chance/got permission to do. While I was never a regular watcher of the show, this introduction interested me, and raised my hopes for the novel. Hopes that, I’m glad to say, were not entirely unfounded.

The plot of the book goes down on the docks of a semi-fancy cruse ship where Natalie intends to attend a business seminar, in the hopes of making something of the PI agency she and Monk (mostly her) have set up. However, it doesn’t take long for problems to arise. For one, the ship is also hosting ordinary guests since the business seminar part has been losing money. For another, Monk manages to make it onboard the ship, immediately clashing with his roommate. Natalie finds a bastion of sanity in the ship’s cruise director, Mariah, but this is Monk, where no one can make friends without said friends dying. Or being a murderer.

An overheard conversation at a stop tips Natalie off that Mariah and the captain of the ship are having an affair. Natalie (not unreasonably, since Monk is around, and when Monk is around, people die) decides that the captain intends to off her. Monk agrees, and the two watch him. Of course, this being Monk, murder happens anyway.

The man overboard alarm sounds, resulting in the discovery of Mariah’s body floating in the water. An injury on her head leads to the conclusion that she simply slipped and fell in the water, but Monk and Natalie (as well as the reader) are well aware that the captain bashed her over the head, but in Monk tradition, he has an alibi. He was in full sight of multiple passengers, including Monk and Natalie for some time before the alarm went off, making it impossible for him to have dumped Mariah's body overboard. The trick here is split into two parts, and shouldn’t pose a challenge to the experienced mystery reader. Still, the second part of the trick is clever, and well-hinted. But there’s more to the book than this, including a problem brought up by the captain himself.

A rash of vandalism has struck the ship, and not the fun kind of vandalism, the not-fun kind, such as screws being removed from balcony railings. While no one has died yet, the captain (or to be more accurate, his wife) decides to hire Monk and Natalie to look into the incidents. This sub-plot is also handled surprisingly well, though it needed a tad more cluing to push it into “fair play.” Still, I was oddly satisfied.


There’s another subplot running through the novel, involving the opening of the book, which involves the murder of an old man and the theft of Shakespeare's First Folio. The result, which incidentally kicks off the book’s plot, results in Natalie meeting the obligatory cute guy, who promises to continue helping the police in their investigation, only to keep blowing them off at every turn. This thread finally culminates in a hit-and-run at one of the ship’s stops, and I’m sad to say that not much comes of it. Ultimately, it just serves to draw out the climax.

All in all, this was actually a good book, which I wasn’t expecting. It was so good, that I actually sucked it up and got the next Monk book Conrad did, which I thought I never would. Recommended.
Next time, Christie! Probably.


* "This person could not have committed the murder, therefore he did."

** See also: "Hollywood DID, Hollywood Kleptomania, and Hollywood Insanity"
Posted by The Dark One at 12:21 PM No comments: