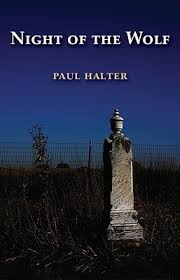 Were I more pretentious/educated, I would throw in some French phrase here to seem intelligent. As it is, you get a summary.

Paul Halter is claimed by many to be the next John Dickson Carr, who has come to purge all inferior mystery novels and replace them with holy locked rooms.* Having read most his translated novels, I will say that this is...semi-accurate. His books are rather good, but there always seems to be something holding them back. And I, sadly, have not read enough Carr to give an accurate comparison. Thankfully, I'm just reviewing a short story collection.

The Night of the Wolf contains ten of Halter's short stories. They either feature Dr. Alan Twist (Dr . Fell after his weight loss program), Owen Burns (a jerk), and Irving Farrell (the most interesting one, so of course he doesn't have his own novels). Personally, I feel that the short story format plays up Halter's strengths, and limits his weaknesses. But that's for the summary, let's get to the dead people.

The collection opens with the Farrell story, "The Abominable Snowman". While wandering a cookie-cutter town on his way to a party, Farrell runs into a mysterious man who offers to tell him about a murder committed some years ago. You know the story, two brothers love the same girl, one dies in war, other one marries girl, second brother possesses snowman to beat his brother to death, and the village fool get strung up for it. I don't know about you, but I think we need more Christmas stories like this. The story itself is rather complex (or so it seemed to me when I read it) but the clues are there, it's quite clever.

Next up is Dr. Twist in "The Dead Dance At Night". Stranded in a mansion, Twist recalls a story about dancing corpses in a sealed tomb, and what do you know, his hosts were the people in that story. Twist pretty quickly unravels this one, and even solves a murder in the process. It's another good story, though it's hampered by family exposition. (And an error, as I'm pretty sure Halter has a dead character giving advice).

The good doctor shows up again for "The Call of the Lorelei" A ship ride down the Rhine brings him into contact with a man who offers to tell him of a real death caused by the Lorelei. A German man was lured out onto a frozen lake, and only his foot prints were found. Obviously, there's a human hand behind it all, using a simple, if clever trick. Fun Fact: I actually narrated this story for a speech class once. Abridged, yes, but still.

"The Golden Ghost" is up next and, well...it's a thing. The story stars a modern Scrooge who's more than I tad disturbed by the match girl that shows up on his doorstep, especially when she explains that she's been chased by a flickering, golden ghost. The lack of footprints in the snow behind her seem to disprove it, but when a friend confirms the story, our "hero" is plunged into a nightmare. Which this story is. I'm dead serious, that ending left me cold when I first read it. Kinda like Carr when  he was feeling dark.

We now move on to another non-series story, "The Tunnel of Death". A drifter talks with a police officer (it's at this point that I feel I should mention that this is the format of just about every one of Halter's short stories. Person talks to Great Detective(TM) about something, Great Detective(TM) solves it. Not so much complaining as musing.)  about a series of bizarre murders in a tunnel under the influence of one of the most ridiculous gypsy curses in mystery fiction. People have been shot by an unknown and invisible assailant, with the most recent death being the obligatory evil businessman who was shot even though he was surrounded on all sides. It's a bit of a weak story, honestly, the main trick borders on cheating. But hey, one of the suspects in it is named Picard, so you can sing the Picard Song while reading.

Owen Burns, lover of the fine arts and the fine art of murder, realizes that this collection doesn't have enough of him yet, and sets out to rectify that with "The Cleaver". While indulging in that great British pastime of complaining about America, Burns meets an American diplomat who offers a true American ghost story. A bank teller has a dream about a gruesome murder, and is so shaken that he goes to try and confirm it...and runs right into the "killer". He insists on checking on the "victim" and, surprise surprise, he's gotten a cleaver to the throat. Another good story, though hampered by the lack of possible false solutions.

The next story once again features Burns, though the pain is soothed by what is this collection's highlight, "The Flower Girl". Some botched flirting lets Burns and Achilles Stock (his Watson, much too unimportant to mention before now) hear about a rich family who were witness to a young flower girl's Santa visit, a claim made all the more convincing by the bizarre tracks in the snow: The prints of reindeer and a sleigh can be clearly seen in the snow outside...but they seem to start and stop in the middle of the street. The local Scrooge objects to this "joy and happiness" crap, which may have led to Santa going full Black Christmas on him...and dropping him from his sleigh! The solution to this story is neat and simple and oh so fitting for the puppet master(s) behind St. Nicholas. It also led me to a kindred spirit in Achilles, who gets just as annoyed with Burns as me.

The next story, "Rippermaina" is sadly the point where the collection stumbles a bit. Halter indulges one of his favorite topics, Jack the Ripper, via a man who claims to be dreaming of Victorian London, with some murders tossed in for good measure. A dull thriller with an obvious TWEEEEEST.

Dr. Twist (I swear I didn't intend that pun) has another showing with "Murder in Cognac" Don't know what that is? Neither do I. And I still don't know. All I know is that a man is poisoned in his locked tower after being threatened by Philippe Faux (marvel at that name, marvel more if I managed to spell it right), only managing to get out, "The cat brought a tin." This story is hard to review, because, thinking about it, I may have accidentally hit on Halter's game when I first read this, making it too obvious. (Le Spoiler: I think that Halter intended to trick the reader into think  that it was a reverse whodunit. The killer is obvious, so it's just a matter of how. I never hit on that idea, so I hit on the actual killer, and therefore ended up not liking the story.) The solution/main clue are both a tad blah.

The collection wraps up with "The Night of the Wolf." Farrell once again takes the stage, this time looking into the death of the town's skirt chaser, apparently killed by a werewolf that not only claws you, but stabs you. For reasons. At least it was kind enough to leave only its footprints in the snow leading up to house,  It doesn't take a lot of effort on Farrell's part to unravel the facts, though the backstory is a tad vague, and the solution might raise an eyebrow or two.

All in all, I liked it. Halter is at his best in short stories, I feel. His characters tend to be a tad flat which isn't as much of a problem as it would be in a full novel, and the limited page counts makes him focus on one problem instead of jumping between numerous problems, some of which aren't explained well. This, however, is a very solid short story collection, and good, I think, for getting someone new to mysteries into them.