Chapter and Hearse (1985) by Bill Pronzini and Marcia Muller 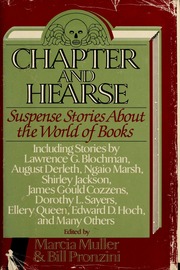 One of these days, I’ll learn to skip mystery anthologies. And there's a few books with this exact title, which shouldn't surprise me.

Chapter and Hearse is a collection of mystery stories by Bill Pronzini and Marcia Muller revolving around books. Normally I wouldn’t bother with these sorts of things, as experience has taught me that these sort of multi-author anthologies aren’t usually worth my time, but I’m a bibliomaniac and there were a few authors I recognized in it. Sadly, it wasn’t to my taste as will be shown by the quick and to the point review.

The collection opens with “The Missing Shakespeare Manuscript” by Lillian de la Torre, part of a series starring Dr. Sam: Johnson (I swear the colon is there), the guy who made the dictionary and Sherlock Holmes before there was Sherlock Holmes (he even has someone who follows him around and writes about everything he does). The plot revolves around a lost Shakespeare manuscript, which is stolen and ransomed back to the owner. The plot is exactly what you would expect from that summary.

“The Man Who Collected Poe” by Robert Bloch (of Psycho fame) is more of a horror story than anything, as a nameless narrator is invited to the home of the latest in a family of Poe fanatics. The collection is vast indeed, from little known stories to letters from Poe, to a dark, dreadful secret in the family vault. It’s well-done, and a very Poe-esque tale.

“The Penny-a-Worder” is a Cornell Woolrich story that forgoes his usual DOOM GLOOM DOOM in favor of a light-hearted story about a pulp writer who has a night to write up a story and make it (comparatively) big. It’s more of a comedy than anything, and even the twist is played for laughs instead of NEVERENDING DESPAIR which is what you normally get in Woolrich. Good fun, I just wish he’d gone into a little more detail about the process, because I get the impression he knew it very well.

But did couples talk like that? In any era?

“Clerical Error” by James Gould Cozzens is a short-short about a bookseller who’s confronted by an angry colonel, who wants to question why the family of his reverend brother are getting a bill for pornographic books. It’s a simple story, but it needed a few more pages to set up the twist and resolution.

“Murder Walks In Marble Halls” by Lawrence G. Blochman (he of  Dr. Coffee fame) is the longest story in the collection.  This stars a worker at the New York Public Library who ends up digging into the murder of one of the trustees. Also, the flap lies about this story, saying that the victim was shot to death, in truth he’s shot at but is actually stabbed to death. Poor form. It’s an interesting story, but a tad too long for my tastes, and the cluing is weak. The description of the library is neat, however, though I had trouble visualizing everything (which may have been why I thought it was weak, I had a hard time figuring out where everything was).

Nedra Tyre’s “Reflections on Murder” is the story that must be included in every anthology: The one that makes you wonder why it’s in the anthology. It’s a short tale, about a narrator who befriends an old woman and the fallout from it, but everything happens too fast and with little warning, such as the protagonist’s actions. And barring the opening monologue and the protagonist’s love of books, it doesn’t even really fit the theme.

“The Adventure of the Spurious Tamerlane” is an August Derleth story starring Solor Pons, who’s totally not inspired by Sherlock Holmes no sir. This time, Pons is called to a bookseller who wants to report someone who left a collection of Poe stories at his bookshop (forged, as Pons discovers). It’s in the tradition of the Holmes stories, in that it’s not so much a fair mystery, so much as it is a chance to watch Pons show his stuff. It’s good. (Also, the back flap gives things away again.)

Anthony Boucher steps up next with “QL.696," one of his stories starring the alcoholic ex-cop Nick Nobel, who contributes his wisdom to the unraveling of the shooting of a librarian who left the title behind as a dying message. Sadly, if you don’t have the information on hand, you have no chance of figuring it out.

And then the heavens part and Edward D. Hoch presents “Murder at the Bouchercon,” a refreshing puzzle story that takes place at Bouchercon XIV, where the topic of discussion is the works of the late Conrad Kazer. His works have been tied up for years, but an agent thinks she might be able to get her hands on them. Cue Hoch’s mystery writer protagonist stumbling on her stabbed body in her hotel room, with only the dying message “Kazer con” to go on.

Like I said, this is a pretty solid puzzle plot, fairly presented. One of these days, I should do a post on why I like Hoch so much, but I think it’s because he does solid puzzle plots, and pretty consistently as well. Admittedly, there are perhaps one too many twists, but it’s all done quite well. And all those cameos!

Next up is “Seven Degrees of Ambiguity” by Shirley Jackson. This is a more toned-down story than what’s come before, with a young boy hanging out in a basement bookshop when a couple come to look at books. The preface says that this story is quite ambiguous, and indeed it was, so ambiguous that I had no idea what had just happened, mainly because I expected more of a climax. A re-read (and some double checking on Google) confirmed that what I thought just happened had happened, but I had expected more from the author of “The Lottery”. But that’s on me.

Dorothy L. Sayers comes next with “The Dragon’s Head”, in which Lord Peter’s nephew, who has one of the most disgustingly British names ever, Viscount St. George, buys a book which seems to be the target of unknown parties. It’s a fun little story, even if it was so British that I felt a monocle growing out of my skull while reading.

Also: The part where the nephew elevates Lord Peter from “Quite Decent Uncle” to “Glorified Uncle” when he whips out a gun is both accurate to ten-twelve year old boys and got a chuckle out of me.

Next up is “The Great American Novel” by R.L. Stevens, a penname of...Edward D. Hoch! Yes, he gets two stories in this collection, and I’m quite happy about that. This time, the protagonist is an editor digging through slush piles, which from what I gather are unsolicited manuscripts, in hopes of finding the next great novel. Then he stumbles across one, but the author is more of a recluse than Thomas Pynchon and willing to go to great lengths to keep his identity secret….

This isn’t as much of a traditional mystery as “Murder at the Bouchercon”, but still fun, with a neat plan and not only a least-likely-culprit, but a least-likely detective. Sadly, the cluing is weak, with the main clue being vague and delivered about two pages from the reveal.

Ellery Queen steps up next with “Mystery at the Library of Congress” which I kept reading as “Murder” for some reason. This time, Ellery is called in to help break up a drug ring, whose member are passing along contact information via book titles. It’s a pure logic puzzle, as Ellery has to figure out who the intended contact is, and unlike some stories of this ilk the amount of special knowledge needed is very small.

One of our editors, Bill Pronzini, steps up with “A Craving for Originality”. It stars the aptly-named Hackman, an author without an ounce of originality in him, whose realization of this and the “hack life” he’s living triggers a bout of writer’s block...and an obsession with originality. It’s a decent story, almost sad, though the climax perhaps comes a bit too quickly.

The collection wraps up with “Chapter and Verse” by Ngaio Marsh, a story which holds the honor of being the only Marsh short I’ve read (out of three) that I’ve actually liked. A man comes to see Inspector Alleyn's wife, Troy, to show a Bible off to her husband. There are dates indicating the deaths of previous owner, and the each has a verse that implies that they died through some kind of judgement. Sadly, before he can get his audience he gets shoved off a church tower.

Compared to the other Marsh’s I’ve read, this flows at a pretty brisk pace, no bogging the story down with interviews or taking forever to get to the action. The cluing is a little weak, but there, and the killer is a surprise. Full marks all around.

Sadly I can’t really rec this collection on the whole. It never really breaks beyond “good”, and most of the stores probably wouldn’t appeal to the fan of classic mysteries. That said, if you find it cheap or in a library, give a try. Not Recommended.
Posted by The Dark One at 5:55 PM 2 comments: