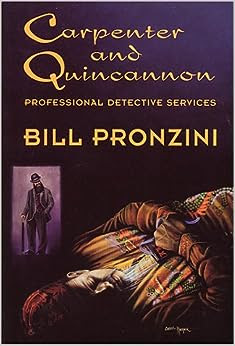 Let's face it, I need to read more Bill Pronzini.

For the uninitiated, Bill Pronzini is one of the few authors who can combine hard-boiled noir with the best elements of the Golden Age. I admit that I haven't read too much of Pronizini, but that will change soon. Like almost every author I read, I got started on his short stories.

John Quincannon and Sabina Carpenter have both gotten a revival recently, but they were mainly confined to two novels and some short stories at the time that Carpenter and Quincannon: Professional Detective Services was released by the obvious suspect, Crippen and Landru. John Quincannon was Secret Service agent, until he accidently killed a woman. Sabrina Carpenter, was the wife of a Pinkerton detective, until he got killed. Together, they fight crime. This is a collection of stories staring the two of them, with a nice mixture of stories, including locked rooms! But can they overcome my nitpickiness about clueing?

No Room at the Inn

Quincannon would really like to be relaxing on Christmas Eve, not hunting a crook thorugh the wilderness. But his paycheck carries him on, and when he sees that the owners of a inn have been dragged in, he needs to call upon his detective skills....

Not really a mystery, but this is still a very competent story. The main mystery part is...semi-clued. It's hinted at, but I'm not sure of how fair it is.

Noah Rideout has a slight problem: Someone is trying to kill him, and they probably have a very good reason for it, he being the stereotypical jerk who's normally killed in mysteries. If he dies, however, Quincannon isn't getting paid, so he's stuck protecting the man, and maybe even figuring out who wants him dead and is willing to act on it...

A decent story. Well-paced, funny, and fairly clued, this story's main problem is that nothing really stands out. It's very good, it just pales in comparison to most of the others. But most of the others are locked rooms, so I admit a bias.

Leonide Zachs is a cloud cracker, someone who can supposedly use chemicals to make it rain. Needless to say, he's a scam artist, and Quincannon has been sent in to bring him in. In what will become a recurring theme here, Zachs meets his end before that, and in a locked room to boot...

This is good. The locked room is nice, and the ending is perfect, but I have two major complaints.
(SPOLIERS 1. The timing. I can buy that they could time the shot with the rocket, it wouldn't have to be absolutely perfect...but how could Collard time the fake shot so perfectly? Especially when Quincannon could just yank him away form the door? 2. How are we supposed to know that Collard knows ventriloquism? Yes, the rest is fair, but still...I admit that I might just be picky. END SPOLIERS)

At the Palace, Lady One-Eye is the best of the best...and she might be an ingenious card shark. Quincannon and Carpenter have been hired not only to prove it one way or the other, but also find out who threatened the Lady and her husband. A task made harder when said husband is shot, and no one sees who fired....

Another good story. Not much more to say, other than that the method isn't clued very well. (If it all...)

Quincannon arrested Long Nick Darrow eighteen years ago, and put an end to his coney game. (Which, despite making me think of some carnival scam, actually involves counterfeiting.) Now that he's been released, and got his old work going, he's aiming right at Quincannon..

This is a thriller rather than a mystery, but it's fun. Not much to say other than generic, "The writing was good, it was funny, etc."

A chance encounter gives Carpenter and Quincannon a shot at fugitive Evan Gaunt. He's being watched, he's on a train, he'll be arrested when he gets off...He's cornered. Then he walks into the bathroom, and vanishes..

This story had potential. A lot of potential. But the cluing is under par, and there's no way you can figure it out. The last twist is funny, but again, no way of you solving it.

Quincannon goes undercover at a logging camp to find the loot of a thief, and bring said thief in. In keeping with his record throughout the collection, something goes wrong. This time, the thief is found dead in his cabin, the door barred on the inside...

Er....Good? Once again, I have no real complaints, other than that the method really isn't clued...but I fully admit that that's just me, and the killer's identity is fairly clued.

Professor Vargas of the Unified College of the Attuned Impulses has gathered together a small group to show off his spiritual prowess, and make money off it. Unfortunatly for him, the husband of one of his followers has hired our heroes to expose him. Even more unfortunately, after showing off what looks like unambiguous supernatural activity, someone stabs him in the back...And not only was the door locked, but everyone was holding hands...

First, that pun is awful. Second, this is a pretty good story, especially with how it explains all of the tricks during the séance....but it almost seemed as if the story was more focused on those, and the actual murder suffered as a result. The cluing was just barely there, and the solution was very simple. The humor was good though.

Quincannon makes a late night visit to an opium den. His target: a lawyer who might know something about the missing body of a Chinese gang leader. Problem: The lawyer is shot, and now Quincannon must hit the streets of Chinatown with only the words "Fowler's Alley" and "blue shadow" to go on...

Once again, more not really a full mystery, but entertaining nonetheless. There's a light mystery element, but it's easy. (SPOLIERS It also falls into the trap of "This person was a jerk to the detective THEREFORE THEY ARE EVIL! END SPOLIERS)

I have to say, this was better than I thought it would be. I recalled finding the stories underclued, but, aside from a few, they were done well. The stories are entertaining to read as well, with some nice humor. Although, the "will-they-won't-they" stuff does get a little vexing.

I give this collection a 7 out of 10. Next time, the only politician I would vote for without hesitation.
Posted by The Dark One at 2:36 PM 1 comment: