The Word is Murder (2018) by Anthony Horowitz 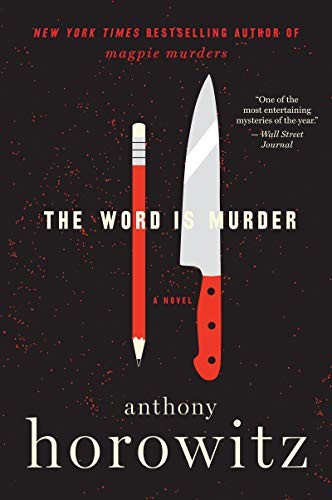 No matter what, I can’t seem to get away from detectives named Hawthorne.

A couple of years ago, I read and reviewed Anthony Horowitz’s Magpie Murders after seeing positive comments about it from other bloggers. I ended up enjoying it so much that I grabbed his next mystery novel, The Word is Murder, almost sight unseen. But would it prove to be another solid example of the modern mystery novel?

The book opens with Diana Cowper planning her own funeral; not an uncommon occurrence for those who want to make things easier for their families. But six hours later, she’s been strangled to death in her home, a bizarre and baffling crime that demands examination by an expert. Enter Daniel Hawthorne, a former police officer who was “kicked out for reasons that weren’t made clear” and who now serves as a sometimes consultant for the police when they’re dealing with an “unusual” case. Hawthorne is called in to investigate, and Anthony Horowitz is following him and writing it all down.

Horowitz (who I will refer to as “Tony” to distinguish him from the author Anthony Horowitz) is fresh off writing Foyle’s War and The House of Silk, and is looking for new ideas. Hawthorne approaches him with a proposal: Tony follows him around and details his case, and they split the profits fifty-fifty. Tony is reluctant, but after being accused of not writing about “real people” at a literary festival, he takes Hawthorne up on his offer.

This book has plenty of meta moments in it, and honestly it was slightly hard for me to keep track at first: for example, Chapter 3 is titled “Chapter One” and revolves around Hawthorne’s reaction to the actual Chapter 1 of the book, and the inaccuracies Tony put in there. That are still in the current Chapter 1. And then Tony follows up by going, “Fine, ignore everything that he mentioned, but the rest is true, including the clue to the killer’s identity.” There’s another chapter where Tony meets with who I assume was Horowitz’s agent at the time, and she says that she doesn’t want to be named in the chapter titled “Lunch with Hilda.” In fairness, my confusion was more due to me trying to read too much into the meta, and the mystery doesn’t hinge on you being able to navigate it. Horowitz uses it all well, and I found his discretions on his different works and writing in general to be very interesting.

Of course, the partnership isn’t smooth sailing: Tony finds Hawthorne frustrating and evasive about his life, and gets a taste of the man’s more unpleasant opinions during the case. I admit though that Hawthorne didn’t come off nearly as offensive as intended. I may have had incorrect expectations based on what I’d read about the book, but Tony came off as the prickly, insulting one to me. Perhaps this is because Hawthorne’s more repulsive moments (like his homophobia) either don’t play a major role or don’t get a lot of development (like the sting in the tail at the end). For most of the book, he comes off as an intense but awkward guy who (based on my reading) does value Tony’s companionship more than he shows. Of course, I also have the expectation that Holmes-Watson style relationships will end with the Watson realizing that the Holmes is indeed a genius who has all the right answers, so that influenced me as well.

I mentioned how Tony teases you with a clue to the killer’s identity in Chapter 1. This is partly true. The clue is there, but you won’t realize its significance until late in the book. I would say that this is a fair mystery on the whole; you can piece the killer’s identity together before the reveal, but the full motive behind the crime won’t become apparent until near the end. It’s more like the “modern-day” narrative of Magpie Murders, more a procedural than a more traditional mystery. The killer is well-hidden, and as I said, you can figure out who they are with a bit of thought.

All in all, I quite liked this book. The meta aspects were fun, the mystery was well-constructed, and it was a joy to read. Highly Recommended.

Other Reviews: ahsweetmysteryblog, In Search of the Classic Mystery Novel, crossexaminingcrime, The Invisible Event.