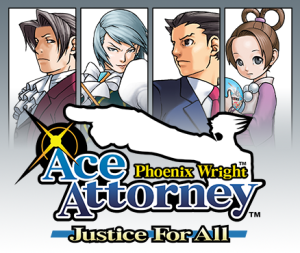 A while back, I said I intended to do a retrospective of the Ace Attorney series. Needless to say, this plan faltered when I realized the sheer number of hours I’d have to contribute to it. That doesn’t mean I can’t ramble about one of the most important moments in my mystery obsession. So this will more nostalgia than an actual review.

The second game in the series, Phoenix Wright: Ace Attorney: Justice For All, is considered by many fans to be one of the weaker games in the series for a multitude of reasons., such as weaker mysteries and a lack of an overarching plot connecting the cases. However, it was my intro to this amazing series, so I can forgive a fair amount. Especially when I consider the role this played in my love of mysteries.

The second case of the game, Reunion and Turnabout, opens with Phoenix Wright’s office being invaded by Dr. Turner Grey, who has an unusual request for the attorney. Two years ago, Grey’s clinic went through a double round of controversy. A nurse mixed up medications, resulting in the deaths of fourteen patients. Shortly after, she died in a fiery car accident. Allegations began to spread that Dr. Grey may have overworked the nurse in the first place, then drugged her to get rid of her in the accident. The good doctor’s plan to clear his name is an idea that’s only plausible in the Ace Attorney world: Spirit channeling.

Grey’s plan is to have the nurse channelled and get a signed confession from her, admitting her full fault about the incidents. Phoenix isn’t sure why he’s needed for this, but then Dr. Grey mentions who the channeller is: Maya Fey, Phoenix’s assistant who returned to her home village at the end of the fourth case of the previous game. She wants Phoenix to accompany Grey before she does any channeling, and Phoenix eagerly agrees.


Of course, the reunion is cut short by the expected murder. Maya and Dr. Gray enter the channeling chamber, and Maya herself locks the door with the only key. Phoenix, Maya’s aunt Morgan, and reporter Lotta Hart are all outside the door when a shot, then another, ring out from the room. The door is swiftly broken down, revealing Dr. Gray's body, and a woman dressed in Maya’s clothes holding a gun. Phoenix and Lotta are ushered out, and the case begins in full, as Phoenix is soon called upon to defend Maya (the fact that she would have been, under the prosecution’s theory, possessed at the time is never brought up) on the charge of murder, against a whip-happy prosecutor.

But then, I’m not talking about that.

The mystery is, to be fair, rather weak. The killer stands out, and the solution to the locked room is one of the basic ones. There’s a rather odd contradiction regarding a bullet that followed more of a miracle path that Lee Harvey Oswald’s. But even in spite of all of that, this mystery still had an impact (the fact that I didn’t realize most of these contradictions and flaws for a while also helps). The final set of reveals, showing the motive for the killer to plunge a knife and bullet into Dr. Grey is one that could only apply in the Ace Attorney universe, and the truth behind the killer (I have to be vague) left me in such awe that I ended up babbling for like twenty minutes to someone (who was in retrospect very uninterested) about it. But that still doesn’t stop this mystery from being my own personal gateway. I was a fan of mysteries before this, but I’m sure this this is the mystery that moved me into being a mystery fanboy.

Anyway, I do hope to be getting to more AA in the future. Next time will either be me taking a look at the DLC for game 6, or a massive info dump of the many locked rooms in this series!
Posted by The Dark One at 8:40 PM