So I love the Ace Attorney series and want an excuse to ramble about it for months on end. 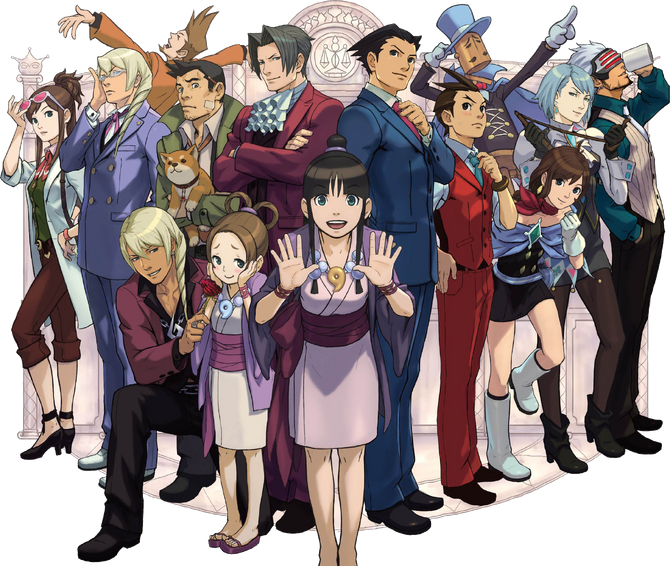 For those of you poor souls who have no idea what I'm talking about, the Ace Attorney series (Gyakuten Saiban in Japan) is a long-running visual novel/adventure game series about attorneys. Better than it sounds, I promise. With five main series games (and a sixth due to come out at the time of this post) a spin-off series, a crossover with the Professor Layton games, and another spin-off taking place in Victorian England, there's a lot to cover.

For backstory: According to the translation of the games, the series takes place in a future where the criminal justice system has been completely overhauled. Trials now take three days max, juries are abolished, the prosecution has far more leeway in what counts as  "proof", "Guilty until proven innocent" is the norm, and really it resembles the Japanese legal system, minus the three days part. This makes sense when you consider that the series was originally intended as a satire of said system.

The series mainly revolves around the life and times of Phoenix Wright and his associates. Phoenix himself is one the more abused lawyers in mystery fiction, regularly subjected to whips, thrown coffee, thrown toupees,, thrown knives, and witnesses who lie. A lot. And perjury doesn't exist in the wonderful world of Japanifornia. (Japanifornia is a word which here means: A nation that results when you claim your game is set in Los Angeles, but then the creators start tossing in more and more Japanese locals.)

I honestly do love this series, in all it's madness. The writing is funny, the translation is top-notch (mostly, "The miracle never happen." is a meme for a reason.), the music is amazing, the characters are varied, and the mysteries are solid. And so, I've decided to go through it. All of it.

Yes, this is the beginning of the Ace Attorney Retrospective (or AAR). I intend to go through all of the Ace Attorney games (even the Layton crossover) and review the cases, one by one. This, obviously. will take a loooong while for me, especially considering I now have about 100-150 hours worth of text to watch on YouTube. Not sure if I intend to hit the manga, depends on if I can find cheap copies. Anything else is debatable.

Yes, this boils down to an advertisement for a project that I haven't even started on, but I'm getting back into shoving my opinions in your face and mocking the idea that I could ever be wrong blogging, and I need that hype.

And for the record, the fat man was due for the last act, but was sadly found dead in a locked room, shot in the head. Maybe. Bullet in the brain, no actual visible injuries. The killer is suspected to be a dashing man in red who was seen running into a room with no other exits, but vanished. It's a Thursday, what do you expect?

Next time: Actual content, and I finish the title with help from the Queen of Crime.
Posted by The Dark One at 10:36 AM