The Night My Friend 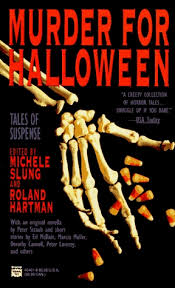 Yes, I said I would do Pronzini. I also said that I would be faster with these....

Halloween is considered our creepy holiday. Probably originating as a pagan festival, it ended up getting turned into a fun time for small children, and an excuse to pig out on assorted sugary things.

Thankfully, some great writers are happy to remind us of the horror that lurks around us.

In the spirit of the holiday, I decided to take a look at yet another anthology. This time, it's Murder For Halloween. Which, surprise, surprise, has stories that focus on Halloween, or All Hallows Eve if you want to be pretentious about it. I admit that I picked this up not because I wanted to celebrate the holiday, but because Hoch and Queen were in it. Still, can the rest hold up?

If there's one part of Halloween that everyone thinks about, it's trick-or-treating. Generally, it doesn't involve knives and robbery, not a revenge that perfectly fits the Halloween theme...

Not much to say here. A nice start to the collection, but otherwise, nothing stand out.

The Lemures by Steven Saylor

In ancient Rome, a man seemingly jumps off of his balcony upon seeing the ghost of a former friend. Meanwhile,  a retired soldier spends his days in fear of ghosts from his past. Both are seemingly being tormented by creatures know as Lemures....

Well. This is strange. This is really two separate stories. One is dull and cheats horrible with its solution on multiple levels, while the other plays somewhat fair, and is actually good. I'll leave it in the air, but know that I only enjoyed the story because of said part. The other half cheats.

The Adventure of the Dead Cat by Ellery Queen

Ellery hates surprise parties, and when this surprise Halloween party has a murder game, he hates it even more. Thankfully for him and the reader, someone has the decency to make the game real, and they were even kind enough to make an impossible crime out of it! Just how did they go though a cluttered room in complete darkness...?

Ah. Quality. A fine showing from Ellery Queen with fair cluing, some decent humor, and a nice problem. Although (SPOLIERS how did Lucy know all of this in advance? The summation implies that she planned this, but everything seemed to be pretty random. The game, the choice of victim...END SPOILERS) But hey, maybe I misread it.

The Odstock Curse by Peter Lovesey

In fiction, Gypsy curses are a thing. They also tend to be very effective things, especially when skeptics are involved, a one man finds out...

Good. That's really all I can say. No real detection. Just a good Halloween story.

The Theft of the Halloween Pumpkin by His Excellence Edward D. Hoch

Nick Velvet is a bizarre thief. Most steal money, artifacts, paintings, and other valuable things. Nick steals only the  worthless, like a jack-o-lantern. He also has a habit of crime solving, like rumors of bet fixing...

For once, I don't have complete mindless praise. This is still a good story, but the clueing is weaker than normal. Other than that, good.

Guy Fawkes had a plan to blow up Parliament. Like all good plans, it was foiled by stupidity, and now he is celebrated in England, Alan Moore's head, and 4chan. None of this is important to our Mr. Faulkener, until he's suddenly thrown back in time...

A young woman leaves a suicide note and her car behind. The implication is obvious. But did she really throw herself off of the Golden Gate Bridge...?

Another "good, not great" story. The opening is good, but the rest is pretty standard. The solution is also pretty obvious. Also....what does this have to do with Halloween? I mean, there's a Halloween party mentioned, but other than that...

A man adopts a black cat, a cat that witnesses its master's slow decent into debauchery. The end result of this is one dead wife and the perfect crime, but cats have a habit of messing with their owners, especially when it comes to the important things in life....

Once again, good, with a nice ending. The build-up is nice, and aside from the older writing style, a very nice read.

The usual tale of children against the forces of adults. This time, it's not just the jerk up the road, but some gangsters too...

Can I just say that this is the best title in the collection? Say it out loud, OMJAGOD. It sounds awe-inspiring, intimidating. I would think of , like, a struggle through the swamps of Louisiana, or something. Unfortunately, I probably enjoyed this story the least. It's not because of the plot; though said plot is an utter mess, but because of the writing style. It's..awful. It's trying too hard to be different, and it's just hard to read.

The Cloak by Robert Bloch

All Henderson really wants is a scary Halloween costume to shake up the fancy party he's going to. He gets one alright. The authentic article...

Just a Halloween story. Good? Nothing really spectacular... (SPOLIERS By the way, ignore that opening, This isn't a sad or depressing story at all. END SPOLIERS)

What a Woman Wants by Michal Z. Lewin

A tale of a writer, a policeman, and a very specific car thief. And the perils or love, just to make it worse...

This...really isn't that good. There's no real mystery, the seeming main premise goes nowhere, and the story itself is a let down.

This is a short enough story that I'll skip a summary. All I'll say is that it involves dares and witches, always a pleasant combination. It's good, but to be honest, I felt like it could have played up some childhood fears more. Knocking on the door of what you think is a witch, not sure what will happen...There could have been more, I think. (SPOLIERS Also, this lady is a terrible witch. All she really does is mess with the kids... END SPOLIERS)

On Walpurgisnacht, an Englishman travelling through the countryside stumbles upon a path that leads to a village where the dead walked. Ignoring his guide as well as his common sense, he sets out...

Yes. That Bram Stoker. The same Bram Stoker who wrote Dracula. This was apparently meant to be some sort of opening, and it does it's job well. The atmosphere is good, though Dracula's actions at the end seem to make no sense.

Trick or Treat by Judith Gardner

Once again, too short for a summary. Just a story that's meant to creepy you out, and it does a decent job of it. I just wish that the narrator wasn't such a jerk though..

One Night at a Time by Dorothy Cannell

He's vampire in recovery with a talent for deduction. He's a warlock chronicling his patient's adventures. And their first client? A ghost....

This had the best premise in the entire collection. A supernatural Holmes and Watson? A world with said supernatural running around? Yes! I want that!...And then the mystery falls flat due to a lack of clueing. It's a shame, as I liked the solution, you just had no chance to figure it out.

Night of the Goblin by Talmage Powell

Once again, too short to summarize. It involves a kid's diabolical plan...that really doesn't seem justified. I'm sorry, but the victim isn't fleshed out enough for this to feel like some great victory. Though I did learn how to put razor blades in candy so that's something...?

Ben Flaxner is a man on the run. Still, he's managed to find a safe haven, and he might be able to resolve things. Then a small trick-or-treater shoots him. Could it really be a ghost that shot him...?

Yes, this has almost the exact same title as earlier story. I didn't make edit the thing. Thankfully, this story is far better than the last few, with a good mystery with a nice dose of humor. It's my first Boucher too...

He's called Hat. He's a jazzman, a good one, and one who no one knows much about. A college student sets out to change that, and gets a tale of a Halloween night, and a night in the bad psrt of town...

I admit, I have a weakness for these types of stories. Both the story within a story, and the small child seeing things that he shouldn't. Thankfully, the story mostly lives up to its premise, with a good atmosphere and storytelling. Sure it's not a mystery, but for once, I'll let my elitism slide.

Well...This really isn't filling me with a desire to keep reading anthologies. Once again, while it has it's highs, for the most part, it never really gets above average. This may be because I'm here solely for the mystery aspect, while this anthology is more focused on horror for the most part. Can you really say that Yesterday's Witch or Walpurgis Night or The Cloak are mysteries? Or crime stories for that matter. This is primarily a Halloween anthology, and it falls short as a mystery one.

Yet, the Halloween aspect isn't all that good either. I'm no expert on horror, but these stories really aren't scary. A little disturbing in places yes, but Trick or Treat was the only one that I finished with a sense of horror. It just isn't scary.

Next up, Pronzini! For real this time!
Posted by The Dark One at 9:54 PM